The Academy of Masonic Studies, emerged in 1977, during the Grand Master’s Degree of the respectable Grand Master, Juan Rafael Sánchez Morales, being created by means of Agreement 2628, dated September 12, 1977, in accordance with the draft submitted by the High Committee on Masonic Studies, whose programme was duly approved by the Grand Council at its meeting on 5 September that year.

His work began on Mondays in the premises of the 9th. Street 10-71 of the zone 1. Initially, it was profiled with a school of masonic studies functionality, where after enrollment was attended courses extending at the end diploma of attendance and training.

It was subsequently amended according to Act No. 3-99-2000 of the first meeting of the third quarterly session held by the High House on July 17, 1999, ratified by Agreement No. 4573 dated July 19, 1999, of the Respectable Grand Master Baudilio Portillo Merlos.

In its reform, the Academy of Masonic Studies was conceived from the need to grant masonic training to the Officers and members of the Workshops of the Jurisdiction, for which the High Commission of Studies, Teaching and Masonic Publications of the Grand Lodge, formulated the draft for the establishment of an Academy of Masonic Studies and submitted an opinion thereon,

Such an Academy of Masonic Studies was created according to Article 1º. “as a cultural scientific organism dependent on the Grand Lodge of Guatemala, of Ancient, Free and Accepted Masons, to advocate for the integral overcoming of the mason,” and was assigned as a purpose: “to carry out and direct research and studies that require, purify and rationalize the symbolism, doctrine, philosophy, jurisprudence, and history of Freemasonry.”

The direction of the Academy, since its first foundation was planned in collegiate form, in charge of a Board of Directors, composed of seven Master Masons with a duration of four years, which were proposed by the former Ex-Grand Masters by the Venerable Masters of the Lodges of the Jurisdiction, and three chosen at the discretion of the Respectable Grand Master.

By Agreement No. 4568 dated 28 February 2001, of the Respectable Grand Master Francisco Alberto Saenz Maldonado, Agreement No. 4573, which instituted the Academy of Masonic Studies, was repealed; and it was reorganized as a scientific, cultural, and formative organ of the Very Respectable Grand Lodge of Guatemala, assigning it as its primary purpose to transfer knowledge of Masonic interest to all Respectable Lodges of Jurisdiction. Within such reorganization, the way of integrating the Board of Directors of the Academy was modified, conforming up to nine Master Masons, all appointed by the Grand Master of the Very Respectable Grand Lodge.

With such derogation from Agreement 4573, which established the Academy of Masonic Studies, it was sought to reorganize the way of integrating the Board of Directors of the same, however, the Agreement 4589, which contained the Regulation of the latter, remained in force, thus unconsciously two current and different forms regulated the integration and functionality of such an entity. Although in practice Agreement 4568 prevailed for further reorganization without a regulatory basis.

DESIGNATION OF THE ACADEMY

In 2005, in an act of full justice, the Respectable Grandmaster, Edgar Alfredo Herrera de León, called the name V:. H:. Jesús Joaquín Álvarez de Oviedo, to the Academy of Masonic Studies, was through Agreement No. 4925 dated November 7, 2005, that meritoriously issued such a distinction to one of the founding professors of the Academy and the freemason of greater academic trajectory in the Guatemalan freemasonry.

REORGANIZATION OF THE ACADEMY

During 2005 the Academy of Masonic Studies was in charge of Resp:.  Log:. “José Martí No. 34”, who supervised its organization, putting in charge of it the Q:. H:. Jorge Alberto Castillo Posadas, who for several years was attending the administrative functionality of the Academy, through the generous donation of his personal time.

The normative duality arising from which two regulatory bodies of the Academy were in force resulted in that during the Grand Master of Resp:. Gr:. Mae:. Rafael Eduardo Aragón Guevara, (2007) fixed this regulatory impasse, correcting in principle the normative dualism, for which both Agreement 4589 contained the Regulation of the Grand Lodge were repealed, as well as Agreement 4568 that reorganized the Academy.

The repeal of the Agreement regulating the Academy was made by Gr:. Mae:. Aragon, with the vision of totally restructuring this entity, in order to modernize its management at the service of the national masonic community. This task was entrusted to HH:. Jorge Luis Zamora Prado.

It was thus that the Regulatory Base of the Academy was again endowed, for which on February 22, 2007, Agreement No. 5008 was issued, by which the Regulatory Reform of the Academy of Masonic Studies was approved, it was reorganized, no longer coordinated by Resp:. Log:. “José Martí No. 34”, and passing in charge of a Board of Directors, composed of up to seven Master Masons, all appointed by Resp:. Gr:. Mae:. for five years in office. It also endowed its integration of Academic Units, conforming those of: Masonic Curriculum, Studies and Teaching; Masonic Research and Applied Technology; Masonic Academic Events; Masonic Publishing and Publications; and Masonic Library.

In instituting the new concept of the Academy of Masonic Studies, this was defined as a Permanent Commission of the Grand Lodge, with the specific purpose of attending the process of organization, programming, advice, and promotion in the field of teaching, Masonic education and instruction, as well as providing support, assistance and consultancy to the logistic processes of formation of the Masons of the jurisdiction, and finally taking charge of the projection of the Masonic thought in the profane society.

As objectives to pursue the Regulation he established the following for the Academy of Masonic Studies: 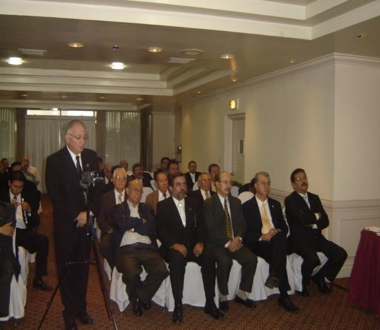 From the management of Resp:. Gr:. Mae:. Rafael Aragón, begins what has been recognized as the modernization phase of the Academy of Studies, and by Agreement No. 5009 dated February 22, 2007, is appointed to chair the Board of Directors of the Academy of Masonic Studies HH:. Jorge Luis Zamora Prado, who is accompanied in such management with the QQ:. HH:. following:

The first step in the new management of the Academy is to divide the functionality of the same between what is the library and the administrative office. The first one begins with a process of purification and documentary reclassification and then it is endowed with a bibliography updated specifically on Masonic character. The second is achieved by authorizing and financing the hiring of a specific secretary position to serve the administrative functions in the service of the national masonic community.

The impetus with which the new management of the Academy begins in 2007 is with the Opening Act of the Masonic Academic Cycle, which was in charge of Res:. Gr:. Mae:. Rafael Aragón, where the Order “Nosce te Ipsum” of the Academy was delivered for the first time, and that it be delivered to the QQ:. HH:. Jesús Joaquín Álvarez de Oviedo. The academic activity consisted of the dissertation of the Inaugural Lesson by QQ:. HH:. Héctor Rosada Granados on the theme: “Freemasonry in the current political conjuncture”, followed by a Comment Panel composed by QQ:. HH:. Jesús Joaquín Álvarez de Oviedo, Carlos Humberto Sandoval Cardona and Mauro Roderico Chacón Corado. 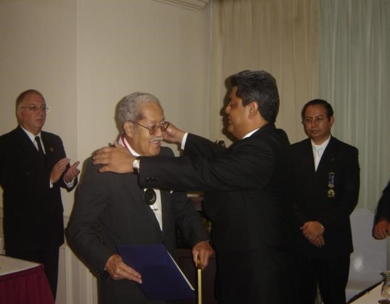 Another important event among others that took place during that first year of restructuring was the Model Session for Exaltation of the Degree of Teacher, whose purpose was to promote the unification of this Ceremony and which was the starting point for the subsequent Liturgical Reform that was promoted. 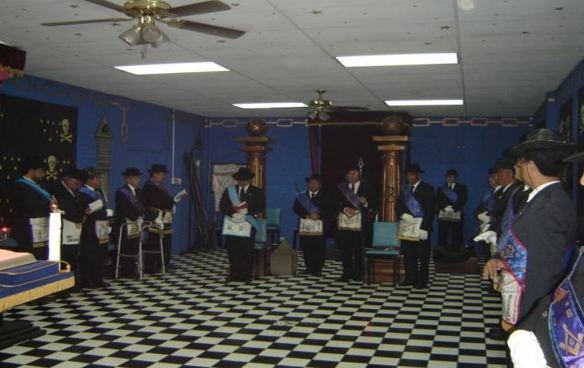 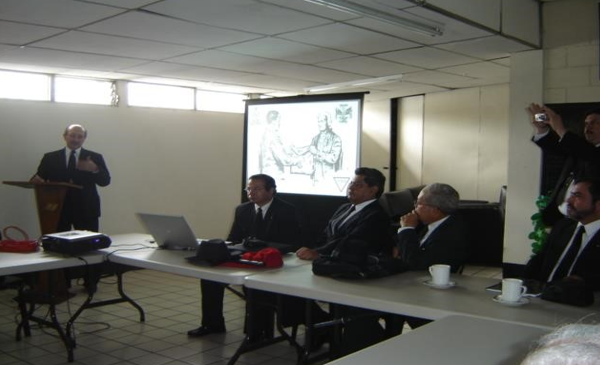 The new academic management since the restructuring undertaken included the following:

By Agreement No. 5031 dated June 7, 2007, it was established that the book “Compilation of Paths” was authored by Q:. H:. Jesús Joaquín Álvarez de Oviedo was recognized as mandatory Masonic Literature at the time of initiation in the Degree of Apprentice, administered through the Academy of Masonic Studies, since such entity had requested such management, before the lack of literature and before the disposition of a whole edition without being consumed. For this purpose, an agreement of mutual collaboration was signed with Resp:. Log:. “Firmeza” No. 3 owner of the copyright.

On May 12, 2008, Vocals II and IV of the Board of Directors of the Academy were replaced, and the QQ:. were appointed for this purpose. HH:. Enrique Martínez Mena (Vocal II) and Federico Arnoldo Zea Acuña (Vocal IV), by Agreement No. 5110.

By Agreement No. 5127 dated 28 July 2008, the Apprentice Degree Study Pensum, prepared by the Academy of Masonic Studies, was approved, and it constituted a whole historical disposition by being instituted as the first official pensum in the history of National Freemasonry.

Through Agreement No. 5134 dated August 22, 2008, the Official Curriculum of Masonic Studies was approved as a guiding document and guide for the development of curricula in the Symbolic Degrees of Apprentice and Fellow Mason. In a similar way, it had the historical connotation of constituting not only at the national level but also at the Central American level the first document of that nature.

By Agreement No. 5136 dated 22 August 2008, Fascicle No. 1 on “Basic Philosophy of the Degree” was approved as the first unit of the Apprenticeship Degree Study Pensum.

At the express request of Resp:. Gr:. Mae:. Rafael Aragón was proposed to the Presidency of the Academy, to promote two processes of great transcendence to the national freemasonry, being these:

ESTABLISHMENT OF THE COMPUTER CONSULTING CENTER OF THE ACADEMY

In 2008, in the Great Veneration of Q:. H:. Rafael Eduardo Aragón, the product of a generous donation of computer equipment, inaugurated the Computer Consultation Center of the Academy of Masonic Studies, at the service of the Masonic community of the Grand Lodge of Guatemala,

The following images show the speech of the Resp:. Gr:. Maestro Q:. H:. Rafael Eduardo Aragón, accompanied by the president of the Academy, Q:. H:. Jorge L. Zamora Prado and Q:. H:. Joaquín Álvarez de Oviedo, whose name is the Academy, and to whom he was in charge of cutting the symbolic ribbon at the inauguration of the Center, and in another image members of the Grand Picture of the Grand Lodge and the Board of Directors of the Academy of Studies. 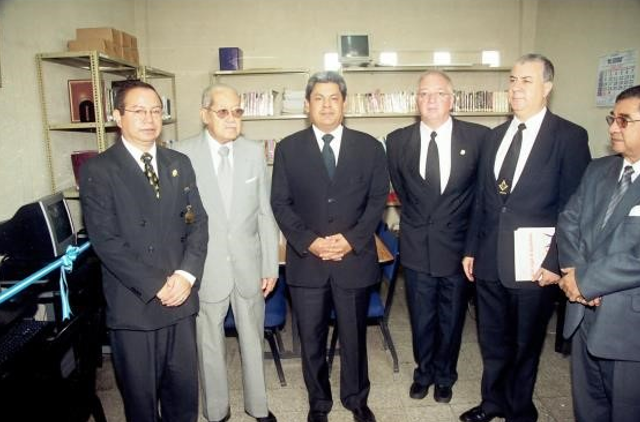 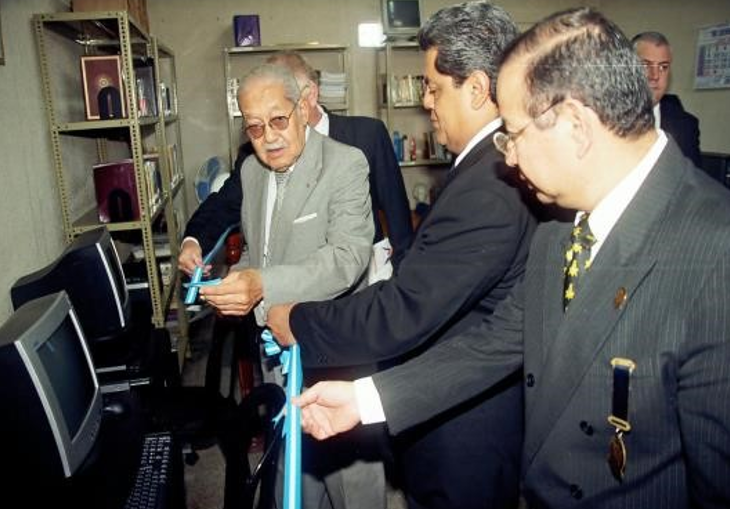 ORGANIZATION OF THE SIXTH LATIN AMERICAN SEMINAR ON LAICISM

In 2008, the Grand Lodge of Guatemala, obtained in Paraguay the headquarters for the organization of the VI Latin American Seminar of Secularism, corresponding to the date of the Resp:. Gr:. Mae:. Q:. H:. Carlos Sandoval Cardona, during his administration said event in 2009, for which he appointed the Academy of Masonic Studies, the coordination of the organization of that event, for which under its umbrella was founded the Lay Institute of Contemporary Studies of Guatemala, with which two regional pre-seminaries were held in the West and the East under the respective sponsorship of the Lodges “Fraternidad” No. 16 Or:. from Chiquimula and “Fénix” n° 2 to Or:. from Quetzaltenango. 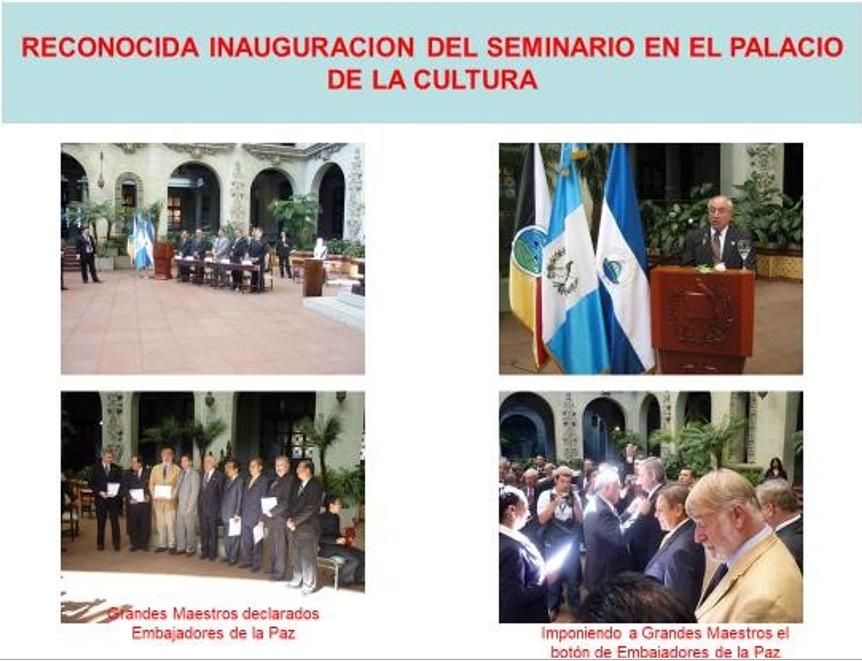 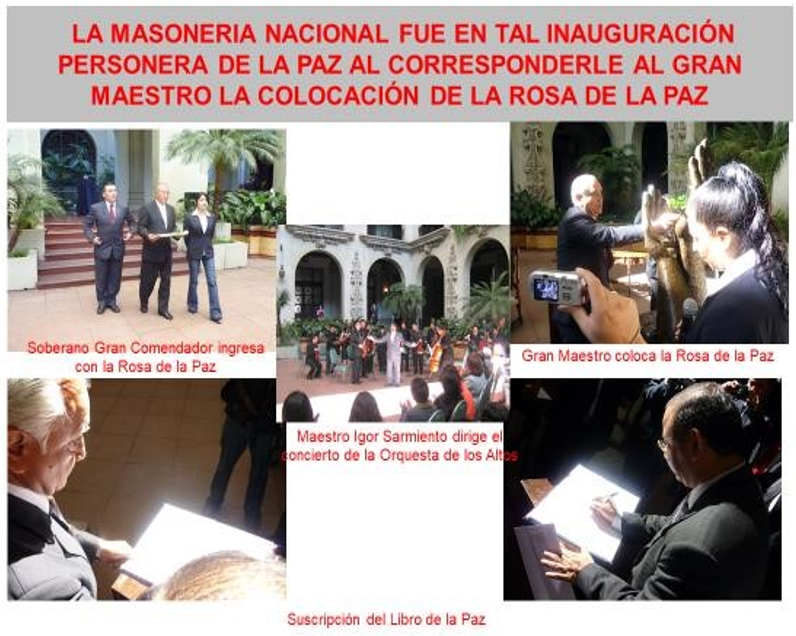 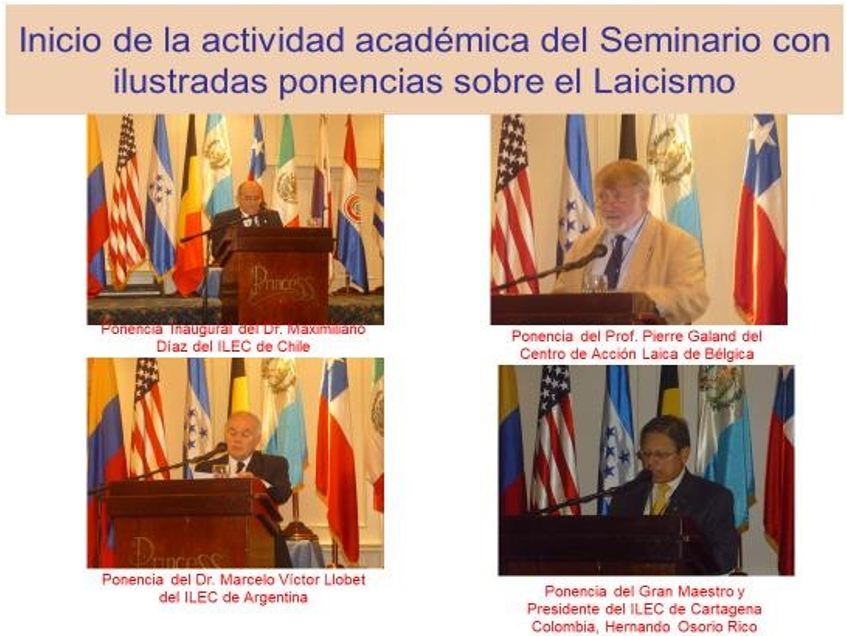 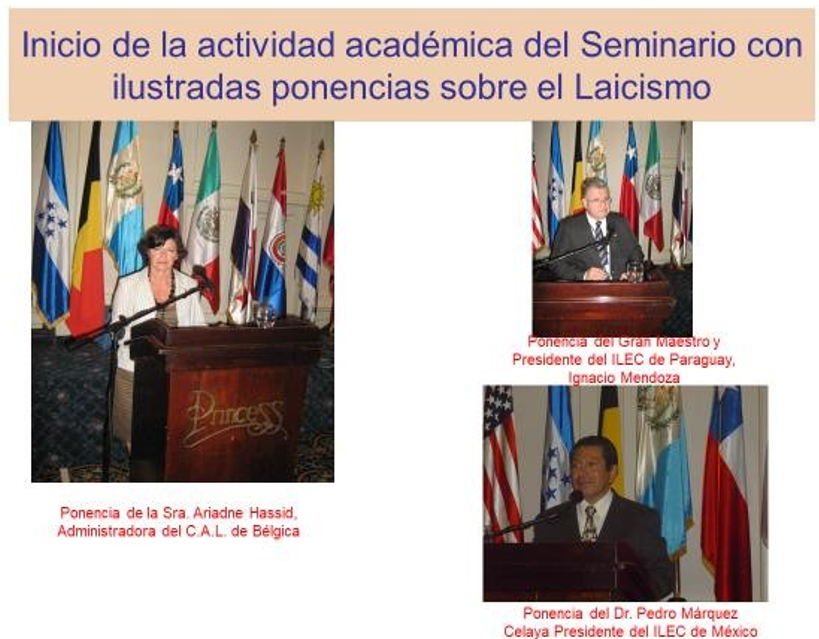